Progressive / extreme power metal band Immortal Guardian is once again taking the epic sounds of their concept album Psychosomatic on the road, this time taking to the “Brovember Quarter”. The group’s week-long hike through the West Coast begins Friday, November 5 at Pubrock Live in Scottsdale, AZ, includes an appearance at the RuinFest VI Fest in Santa Ana, CA alongside groups as diverse as Internal Bleeding, Mictlantecuhtli and their teammates Voices of Ruin, and ends the following Friday, November 12 at Toot’s Tavern in San Francisco, Calif., with more shows to be announced.

These live shows will see the band’s expansive sounds accompanied by a visually haunting laser / light show, with support from Los Angeles-based Venezuelan-American progressive metal band Sifting. The full dates of the “Brovember Quarantour” are below.

According to singer Carlos Zema, “The Guardians of the West felt left out in this last round. This is why we are delighted to offer you the “Brovember Quarantour! We are bringing our psychosomatic show to the west coast! New music, new light show, new merch, a whole new epic. We can’t wait to see you there! ”

The tour sees Immortal Guardian once again taking the sounds of Psychosomatic, their acclaimed new concept record, on the road after a six-week tour in August and September that dazzled metal fans across the country. The album was praised by Metal Temple for its “melody and power, two things vividly displayed throughout this album” and led Metal Rules to call the band “one of the most interesting bands that have emerged in recent years on the international scene “. power metal scene. The music videos for the title track, “Candlelight” and “Phobia,” the latter featuring Angra guitarist Marcelo Barbosa, have captivated the ears of heavy metal fans around the world.

After causing a stir via their 2018 debut feature Age Of Revolution – which featured its own share of creative music videos, including the “Armageddon” -meets-telenovela music video for “Stardust” – and through tours with artists like Marty Friedman, Exmortus and Powerglove, Immortal Guardian reunited in Las Vegas in early 2020 to record their second album. As the spread of COVID-19 and the pandemic that followed began to ensue, shutdowns around the world began to be imposed, leading the group to completely delete the disk they were working on and write. and to create a new thematic record about their emotions surrounding the current. events. The resulting “Psychosomatic” was a truly multinational record, with guitarist / keyboardist Gabriel Guardian – known for his incredible ability to play both instruments simultaneously – staying in Las Vegas, singer Carlos Zema recording his vocals from his home in Brazil, drummer Justin Piedimonte follows from Montreal and bassist Joshua Lopez records from native Texas of Immortal Guardian.

Psychosomatic is a product of the extraordinary turmoil of 2020 that has touched millions of people across the globe, as well as the next step in Immortal Guardian’s exhilarating blend of melodic power metal with progressive / shred trends. The band can’t wait to bring their sparkling sounds and dazzling visuals to the road for their West Coast fans to experience live. 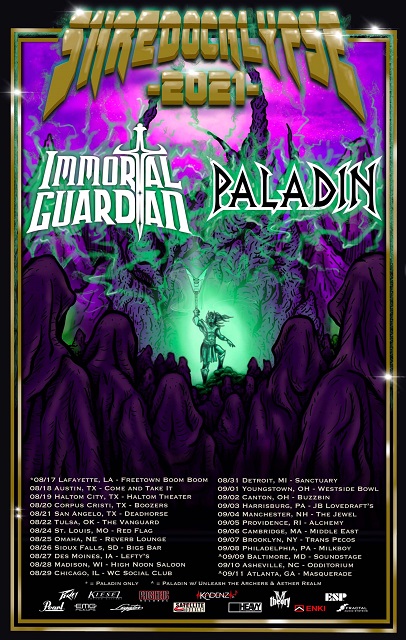 Live shows make a big comeback at the Capitol Theater